Create an Account - Increase your productivity, customize your experience, and engage in information you care about.

The redistricting process is complete. The new plan was approved by City Council at their meeting of March 21, 2022, and was subsequently submitted to the Minnesota Secretary of State’s Office.

After the Minnesota Judicial Branch Special Redistricting Panel released its redistricting plans on February 15, 2022, the city’s precincts needed modification due to the slight changes in legislative lines. The City of Maple Grove remains in U.S. Congressional District 3; however, the redistricting plans did renumber most of the senate and house districts throughout the state. The City of Maple Grove is now included in Minnesota House Districts 37A (western portion of the city) and 37B (eastern two-thirds of the city), and a new district 42A is found in a tiny portion of the city south of Bass Lake Road and west of Vicksburg Lane.

What are some of the factors that are considered when redistricting?

What does this mean for residents?

The city’s redistricting plan retains an even population distribution in all precincts while reducing the overall precinct count. Previously, the city had been conducting elections with 24 precincts. With lower Election Day turnout due to higher numbers of residents voting absentee, a shift in resources to accommodate absentee voters needed to happen. Consideration while devising the redistricting plan was also given to the number of eligible voters (18+ population), current population count, and anticipated future growth over the next 10 years. The city will continue to offer absentee voting and will now be served by 15 precincts.

Is there anything else residents should know?

This summer, residents will receive by mail a post card with their election districts and polling place location.

This is an example of the post card (images of the front and back) that will be mailed in early July 2022. 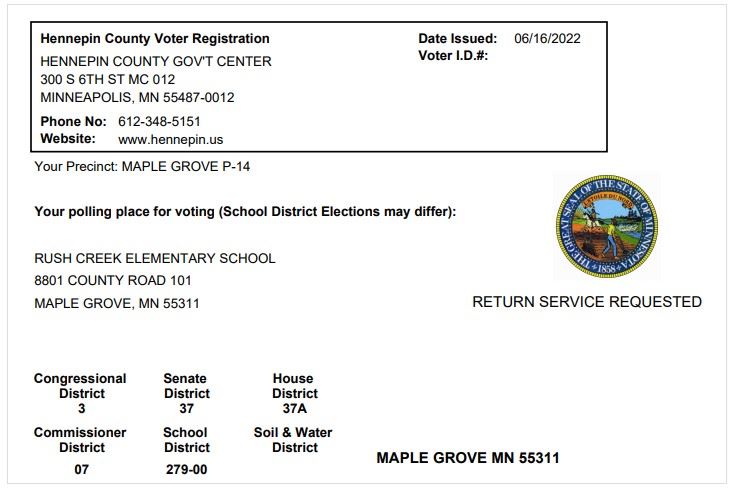 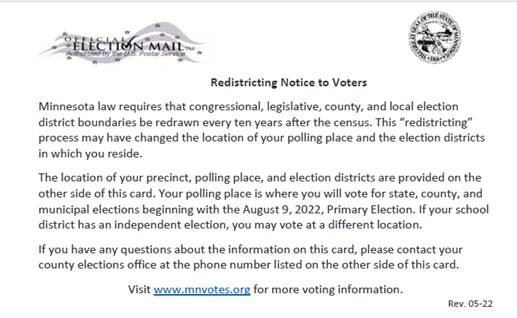 Election maps will be posted once available.

As a reminder, Maple Grove 2022 election dates are as follows: